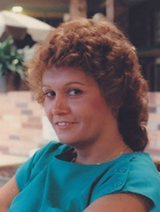 July 3, 1993, was a day in the life of Sheilah A. Doyle (40 years old) that will never be forgotten by those who loved her dearly.

Bill Doyle (44 years old), her husband, awoke at 12:30am and noticed that everything was still the same as it was when he went to bed.  He noticed that his wife was not in bed, so he went downstairs to see where she was.  He did not see her anywhere, so he proceeded to the family garage.  As he opened the access door, he noticed that her car was in the garage, her purse and nurse bag were on the passenger seat of the car, but that she was nowhere to be found.  At that time, Bill’s oldest daughter Kelly (19 years old) woke up and asked her dad what was wrong.  Bill told Kelly that he could not find her mom anywhere.  At that time, Kelly offered to get in her car and drive around the neighborhood in hopes of locating her mom.  At the same time, Bill called the Cook County Sheriff’s police.  A squad car arrived at the Doyle home at the same time Kelly arrived back.  She told the police officer and her dad that she was unable to locate her mom.  The officer then asked Kelly for a picture of her mom for identification purposes.  The police officer then called for backup and minutes later a second officer arrived at the Doyle home.  Both officers shined their flashlights around the garage, Sheilah’s car, and the front of the house.  They then asked Bill for his second set of car keys to the ’93 Toyota Sheilah drove and asked Bill and Kelly to step into the house for a few minutes.  Not even two minutes had passed when one officer arrived back in the house where Bill and Kelly were waiting.  He told Bill and Kelly that “there was a crime scene in the garage” and that “the lady in the picture was found in the trunk of the car.”  Kelly asked if her mom was ok, and the officer said that they checked for a pulse and that there was not one, so at that time Kelly and Bill knew that Sheilah had died.  The officer then told Kelly and Bill that the garage was declared a crime scene and that no one was allowed to leave or come to the house.

At 1:30am, two Cook County Sheriff investigators arrived on the scene not long after the conversation Bill and Kelly had with the police officer.  The investigators took Bill into the family’s downstairs bedroom and asked him if he was aware that 85% of homicides were family related.  Bill said he was not aware, but said that he wanted to know what was going on.  The investigators told Bill that his wife Sheilah was found shot to death in the trunk of her car.  Bill began crying and the investigators began asking more questions.  They asked Bill if he owned a gun, and Bill told them that he did not.  They asked to go upstairs to Bill and Sheilah’s bedroom as well as the home’s basement to look around.  The searching and the questioning continued until 5am.   During the time Bill was being questioned, Kelly was also questioned and helped investigators inventory Sheilah’s belongings that were left in the ’93 Toyota Camry.  Kelly asked investigators numerous times if family members could come to the house in fear of having to tell her younger brother, Kevin (17 years old), and sister, Kristin (8 years old), about the happenings in the family garage that night.  Kelly was able to call her mom’s twin sister, Sharon.  Sharon wanted to come to the house, but Kelly told her that no one was allowed at the house until entry was cleared by the Sheriff’s department.  At 4am Bill was taken to the Cook County Court House in Bridgeview, IL for further questioning.  Kelly remained at the house, and Sharon’s husband Ray arrived and was allowed in at approximately 6am.  Bill arrived back at the house at 9am to a group of his and Sheilah’s family.  Bill was tired, but now he knew he had to let his other two children know about their mom.

Kevin woke up at 9:15am on Sunday, July 4th.  He had his clothes in one hand and a bath towel in the other.  He was ready to shower for 11am Sunday mass at Our Lady of The Woods Church in Palos Park, IL; a weekly ritual for the Doyle family.  Kevin proceeded down the upstairs hallway and down the stairs where he was alarmed to see the entire family sitting around the kitchen and dining room tables.  His dad, Bill, was standing at the end of the stairway crying.  Kevin asked, “Where is mom at?”  Bill said, “She died last night. She was murdered and found in the trunk of her car in our family’s garage.”  Shocked, Kevin turned around, walked back up the stairs, closed the bedroom door and remained there for most of the day.

Kristin was asleep on the downstairs couch.  When she woke up earlier in the morning, she was told by a family member that her dad was not home yet and that she should try to get some more sleep on the family room couch.  Bill was still with investigators at the Bridgeview court house. When Kristin woke up later that morning, Bill carried her into the family kitchen.  He sat her on his lap and told Kristin that her mom had passed away last night.  Immediately, Kristin began crying.

For seven weeks, the Doyle family lived in fear.  They were always worried that the person who killed Sheilah would come back to kill them.  They tried coming up with thousands of motives on why this could have happened, and each time, they went to bed with no good answers.  Even Sheilah’s husband Bill was seen as a suspect in the homicide of his wife, both by the Sheriff’s police and the Chicago media.  Sheilah’s homicide was a top news story on the local NBC, ABC, CBS, and Fox channels.  The Chicago Tribune, Chicago Sun Times, and the Southtown Economist ran articles weekly, and sometimes daily, about the happenings of Sheilah’s case.

On August 20th, 1993, the case was finally cracked.   The head investigators on the case called the Doyle home and asked Bill if Sheilah had ever shopped at the Evergreen Park Plaza Mall, if she had ever picked up hick-hikers, or when the last time Bill washed the black ’93 Toyota Camry that Sheilah was driving the night she was killed.  Bill answered the questions that were asked by the investigator, and wanted to know why there were so many questions.  The investigator told Bill that they had someone in custody that appeared to be lying a lot.  The next day, August 21, 1993, two investigators arrived at the Doyle house to tell them that they had a suspect in custody and that his fingerprints matched the ones on the lid of the trunk and the driver’s side door jam of Sheilah’s car.  Over the next few days, the Cook County Sheriff’s police arraigned three men in connection with the Sheilah Doyle homicide.  The explanation from police was that it was a robbery that went bad.  Each of the three individuals gave a written confession of the events that occurred at the Doyle house the night of July 3rd.

In the end, justice prevailed for two of the three men.  The two individuals who ran up the driveway and forced Sheilah out of her car the night she was murdered, are now serving life sentences without the possibility of parole in a Cook County Jail.  The third individual, who drove the get-a-way car, the night of the homicide, was found not guilty on all counts of attempted armed robbery and first degree homicide.